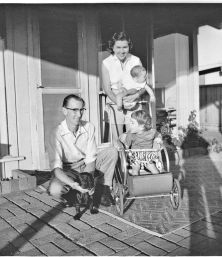 My parents, having two small children, a dog and a newly built house in an equally new subdivision of (though not yet annexed to) San Rafael, CA called Terra Linda, joined the fledgling Christ Presbyterian Church because it was then Terra Linda’s only Protestant church. Neither of  them was particularly religious, but in 1957 most young couples joined churches “for the good of the children.”

As I heard about Jesus dying on the cross over the next two or three years, I found myself both fascinated and bewildered. The story of His resurrection three days later comforted me, but I just couldn’t understand why God allowed people to kill Him in the first place. At one point (perhaps when I was about 7 or 8), my bafflement overwhelmed me so powerfully that I just had to ask Mom about it.

Her reply was, she thought, simple and straightforward: “He died to save us.”

She really should have known that such a simple answer wouldn’t satisfy me, but she really wanted to finish the ironing and get dinner started. I think it annoyed her when I pressed the issue by asking, “You mean like Superman?”

“I guess so, honey.”  Her voice betrayed a little impatience.

I wanted more clarification, so again I probed, “So if Jesus didn’t die on the  cross, would even more bad guys have guns?”

“I suppose so,” Mom answered, “because people who believe in Jesus are good.”

Feeling that I’d managed to solve my own quandary, she quickly exited to the kitchen, leaving  me more perplexed than ever. I understood how Superman got rid of the bad guys and saved “the thriving town of Metropolis” because I watched Him do it every day on television…right before the Mickey Mouse  Club. But I just couldn’t make the connection between Jesus dying on the cross and less bad guys having guns.

Mom, of course, thought she had explained the cross in a manner appropriate to my age. But then, Christ Presbyterian didn’t preach in much detail about the Lord’s work of substitutionary atonement on the cross, so she may have thought it was a minor point of doctrine that I could learn when I had more maturity. How can I fault her for not explaining a Gospel that she didn’t believe herself? I can’t.

This memory saddens me. Had Mom understood the Gospel, she might have led me to the Lord that afternoon. Yet her missed opportunity encourages me in the sense that I see how, even then, the Holy Spirit had given me a hunger to know the truth.

In His perfect time, He did faithfully bring me into contact with someone who helped me understand the power of the cross, but first He had to show me my need for salvation. We’ll talk about that later this week.