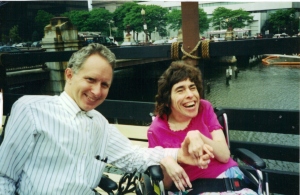 Both of us knew that my June 2001 visit to Massachusetts would be a turning point in our relationship. We’d either become engaged (which I wanted), or we’d go our separate ways. Since John and I each had backgrounds in Charismatic theology, we believed the Holy Spirit had to speak to us, leaving me with doubt as to what the Lord wanted for us.

To complicate my confusion, he and I went through Henry Blackaby’s book Experiencing God together shortly before my visit. Bad decision. Blackaby promotes “listening to God” for personal guidance, a mystical approach that I now understand as having no root in Biblical Christianity. But at the time, Blackaby’s book was widely read in non-Charismatic circles, so I figured it would be okay.

But trying to “hear from the Lord” on this matter frustrated me. Clearly, I had too much of an emotional investment in it. I wanted to marry John, and feared greatly that the Lord might not want that for me.

A long heart-to-heart conversation with Pastor Mike of Church of the Open Door helped me. Although Mike believed in “listening prayer” (and even taught it from the pulpit once or twice), he conceded that hearing God’s will about marriage was probably the hardest thing for any Christian.

So he evaluated the situation from a more practical standpoint by reminding me that I had always wanted to be married and appealing to Psalm 37:4. Then, because he’d had numerous phone conversations with John (some of which I knew nothing about until years later), he enumerated John’s many godly characteristics, concluding that John would be the sort of Christian husband that he’d recommend. I had to agree.

At that point I determined that, if John proposed, I would say yes.

Eventually, that is. Keeping in mind that 1) John rarely gave me yes or no answers without a herculean struggle and 2) that he kept me waiting for four years, I devised a plan to make him squirm a little. Knowing that he wouldn’t propose without asking Mike’s permission and my mom’s blessing as well as consulting his pastor, mom and sisters, I planned to slowly and methodically ask him what each person had said. Once I’d sufficiently exasperated him, I’d accept his proposal and we’d have a good laugh.

June 21st, 2001 threatened thunderstorms, so John rescheduled the Boston Harbor cruise we’d planned till the following Monday. My friend who came as my Personal Care Attendant brought her teenage daughter, so John and I wanted to make that Friday about her.

We stopped at the Boston Tea Party and Ships Museum. At that time, it wasn’t wheelchair accessible, but (being a history geek), I was thrilled simply to sit with John on the deck while my friend took her daughter to the ship.  As I gazed at the water,  awed by the thought that the seeds of the American Revolution had been planted right there, John pulled an apparently sealed bag of Famous Amos chocolate chip cookies from his backpack. We each ate one, though I worked incredibly hard not to drool chocolate onto my clothes (Cerebral Palsy can be annoying sometimes). John offered me a second cookie, which I declined with the excuse that we’d be eating lunch soon.

“Then I guess you don’t want this,” he sighed as he drew a ring box from the cookie bag. Then he looked searchingly into my eyes and asked, “Would you make me the happiest man on earth  by agreeing to become my wife?”

One thought on “Autobiography With Purpose: The Short Answer”