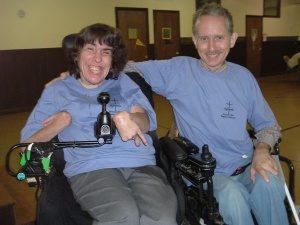 During our first three years of marriage, John and I enjoyed a couple different Personal Care Attendant situations that allowed us to attend Wednesday night prayer meetings and Vacation Bible School. John taught two month-long Adult Sunday School classes each year and I spent a few months helping with the Junior High Sunday School. We also joined Pastor Larry with the Nursing Home ministry and became part of the Missions Committee.

At home, we regularly listened to John MacArthur’s Grace to You radio broadcasts. At the time, his teaching seemed to complement the bulk of what I was learning at Brookville. On a more profound level, however, I noticed myself responding to much of what he said differently than I responded to Pastor Dennis, Pastor Larry and the men who taught Adult Sunday School. He said things, particularly about the dangers of self-esteem, that I’d always seen in Scripture (but that every church I’d been in explained away).

Once Pastor Jim expressed that he had a few problems with MacArthur’s theology, though he didn’t offer any specific examples. I shrugged off his comment, eager to fit into my new church and understanding that pastors are fallible human beings.

Actually, I shrugged off a few things (most of which I don’t remember), telling myself that churches are imperfect institutions made up of imperfect people. I forgave personal hurts and prayed that I’d repent of judgmental attitudes when I disagreed with decisions or practices. The Lord convicted me to cultivate contentment.

In late 2004, Brookville Baptist Church decided to go through the 40 Days of Purpose Campaign. John had read some of Rick Warren’s book, The Purpose-Driven Life, which seemed okay at face-value. During that summer, he used the book as a springboard for an Adult Sunday School class (he later told me that he saw errors in the book, but thought he could correct those errors by how he taught it). Therefore the elders asked John to lead the Adult Sunday School class during the campaign.

In the weeks leading up to the campaign, the church showed promotional videos of Rick Warren to prepare us for the program. It didn’t take long for me to see that Warren repeatedly wrenched Bible verses out of context in order to support his points. I recognized what he was doing because I’d done the same thing years earlier when I worked for Love In Action.

Warren’s shameless misuse of God’s Word prompted me to do some investigative work. To my surprise, I found articles from several sources (including some affiliated with John MacArthur)   confirming my assessment as well as revealing Warren’s pragmatic approach to numerical church growth. I shared my findings with John. He assured me that, if we couldn’t convince Pastor Dennis to abandon the campaign, he would use the Sunday School class to help people exercise discernment when reading the book and watching the videos.

Dennis respected our right to disagree with Rick Warren, but  he didn’t want John to use his teaching position to voice our disagreement. We decided that, during the campaign, John and I would attend Sunday morning services, but otherwise we wouldn’t participate in the campaign. Furthermore, we wouldn’t explain our   lack of involvement unless someone directly asked. Twelve years later, I question the wisdom of that last agreement.

How happy I was when the 40 Days ended and we could assimilate back into church life! But from that point forward, I found myself praying for the leaders at Brookville to develop better discernment. That’s a prayer nobody should have to pray.