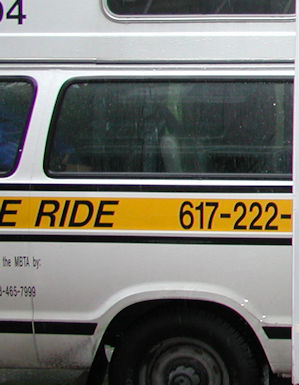 In 2012, John spent most of his two-and-a-half month hospitalization at a rehab hospital, so he had to be transported by ambulance to doctors’ appointments at Massachusetts General Hospital. Consequently, I had to take The RIDE by myself to meet him at doctors’ offices. Usually, I did so with relatively few difficulties (for The RIDE, that is). But one memory from that period still haunts me.

I had to leave before the appointment ended, knowing The RIDE was scheduled to pick me up at a specific time to return home. I arrived at the waiting area with about five minutes to spare, so I tilted back my wheelchair, knowing that RIDE drivers are supposed to come inside and call passengers by name.

After about ten or 15 minutes, the thought struck me that I should wander outside and see if my van was there. Maybe I subconsciously recalled a paratransit van in Memphis leaving me at work years earlier, or maybe I just felt antsy, but I drove my power wheelchair outside and surveyed the pick-up area.

I did see a van, so I asked if he was there for Deborah. He said he certainly was. He boarded me, and we made the journey home with no particular incident.

I understand how people might say that God spoke to me in that moment. I would go so far as to concede that He providentially sent that intuitive thought, protecting me from a potentially disastrous situation. Again, He deserves all glory for orchestrating that situation to get me home safely.

But I’ve experienced other hunches that proved to be absolutely groundless. Those thoughts usually seemed a great deal stronger than that thought at the hospital, and in my continualist days I often considered them as words from the Lord (until, of course, they ended up being baseless).

If you listened to the Phil Johnson video I posted Friday, you’ll remember that he addressed things similar to my experience at the hospital. Let me remind you of a comment he made in his speech:

But sometimes providence is more remarkable than others. And this is our answer to the Charismatic charge that cessationists picture God as remote and uninvolved and impersonal. God always governs by His providence in everything that happens. And all His care for us, all of it, is personal and loving with intimate attention to every miniscule detail of our lives. And furthermore, think about this. The faith that sees the hand of God in the daily outworking of divine providence is not a lesser faith than the kind of belief that can only see God at work when He intervenes in some spectacular or supernatural or miraculous way. Which is the greater faith?

Although the Lord used a simple, ordinary thought to avert a serious problem that day in 2012, I don’t confuse it with Him giving me direct revelation. Rather, I recognize His intimate care for me at an extremely vulnerable moment.  And I think of a beloved passage in Psalm 139:

13 For you formed my inward parts;
you knitted me together in my mother’s womb.
14 I praise you, for I am fearfully and wonderfully made.
Wonderful are your works;
my soul knows it very well.
15 My frame was not hidden from you,
when I was being made in secret,
intricately woven in the depths of the earth.
16 Your eyes saw my unformed substance;
in your book were written, every one of them,
the days that were formed for me,
when as yet there was none of them. ~~Psalm 139:13-16 (ESV)

God didn’t speak to me  that afternoon, but He used a reasonable and explainable thought to protect me from a potentially serious problem. I don’t need to spiritualize it into a mystical encounter. I can praise Him for using that ordinary little thought just in time to get me on that  van.