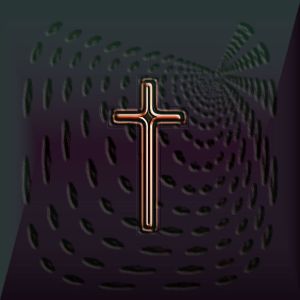 I remember the Good Friday marches Church of the Open Door staged during the years I belonged to that church. With men portraying Jesus (carrying a hollowed out cross) and a Roman soldier followed by six women dressed as mourners,  thirty or forty of us would parade down Fourth Street in San Rafael, CA. Ending at Courthouse Square, we’d sing a few praise songs before someone read a Gospel account of the crucifixion.

Even more fondly, I remember the Good Friday plays that our drama team presented a few hours afterwards. I helped write and direct three of those productions, enjoying the collaborative writing followed by six weeks of rehearsals. Best of all was the actual performance, when the audience reacted to everything we’d worked so hard to portray.

My most cherished memories of Open Door come from those Good Friday observances.

But I also have memories of going down Fourth Street as a mourner and watching scenes of Jesus’ trials and crucifixion with feelings of guilt and frustration. Why didn’t those things pierce me to the core? Why didn’t I weep uncontrollably? My Savior, the Lord of all creation, suffered the humiliations that my friends acted out, and I felt barely a twinge of grief.

It could be argued that I was a false convert at that time. I vacillate on that possibility, though only the Lord can really make that determination. Perhaps it’s more profitable to ask whether or not emotional responses to Christ’s crucifixion necessarily correspond to a person’s spiritual condition.

In one sense I’d say that one cannot truly love the Lord and remain totally unmoved by the suffering He endured. And He endured such unimaginable anguish in order to save His own from suffering the eternal wrath of God. Such grace, mercy and love can’t possibly be met with complete indifference! Not if we really understand the Gospel.

At the same time, true faith goes deeper than human emotion. A lack of external weeping may not indicate a hardened heart. Conversely, outward emotional responses sometimes come from people who actually lack depth in their knowledge of Christ. Be very careful of drawing too close of a  connection between salvation and emotion.

Good Friday does sober us as we reflect on our Lord’s intense ordeal on our behalf. Whether we weep or not, let us remember the meaning of His death on the cross.