Todd Friel asked for a pithy answer. John MacArthur’s reply was witty, funny and a lot  more controversial than it should have been.  If you’ll listen to the following clip from Friday’s Q&A at the Truth Matters Conference in its context, you’ll realize that MacArthur went on to defend his position Biblically.

Maybe the “Go home” crack was unnecessary. Maybe it gave egalitarians an excuse to dismiss Biblical arguments against women preaching to mixed congregations. Personally, I thought it was funny because I wish Beth Moore would go home and stop causing division in the Body of Christ.

Predictably, the comment was isolated from its context and splattered all over Twitter, eventually prompting Moore to make a steel magnolia response that delighted her followers. 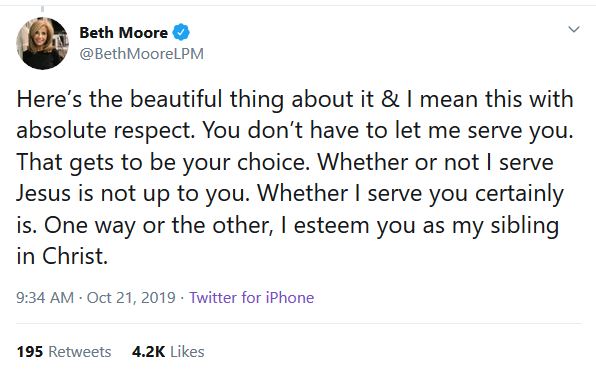 I could easily compose an entire blog post discussing the artfully disguised defiance in her Tweet, but I’ll trust other bloggers to do so. But I want to come at the matter from a different perspective that perhaps deals with deeper issues than two famous evangelicals matching wits with each other. A Tweet I read last night caught my attention, and inspired me to think more carefully about the controversy. 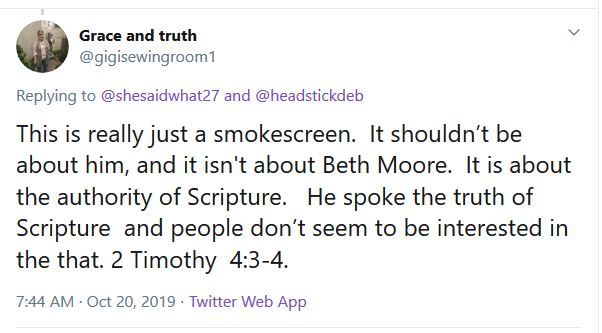 The lady who wrote that Tweet nailed it. People have been more fixated on the two personalities involved in the kerfluffle to consider the point that women are being encouraged to twist Scripture so that it conforms to their personal aspirations. Beth Moore isn’t alone in this rebellion against God’s authority; she’s merely bringing it to a point that threatens the Southern Baptist Convention, therefore weakening conservative Christianity as a whole.

Instead of taking pot shots at John MacArthur or Beth Moore, could we talk about how seriously we take those Scriptures that we don’t like? That question lies at the bottom of every problem with Beth Moore, Paula White, Rick Warren, Joel Osteen — and the list goes on ad naseum. At the heart of all these self-proclaimed ministries, there’s always some adjustment of Scripture to suit their purposes.

If we refuse to view the Bible as both fully sufficient and fully authoritative, we compromise with a culture that hates God. Worse, we establish ourselves as judges over His Word. Do you see the arrogance of that attitude?

For instance, the position that Paul’s prohibition against women preaching was either cultural or less authoritative than the teachings of Jesus betrays a clear rejection of 1 Timothy 2:12. Who is Paul to place restrictions on women? So they devise clever arguments to justify their rebellion. In essence, their demands that women hold positions of power compel them to minimize or negate God’s Word.

John MacArthur may or may not have erred by letting Todd Friel bait him into his witty “go home” quip. But fixating on the proprietary or impropriety of his remark ignores the bigger picture. Each of us needs to constantly ask ourselves if we put our personal agendas above the authority of Scripture. When we rebel in that way, let’s  be quick to repent.